How To Tape Hands and Fingers for Rock Climbing

There are a few essential pieces of gear needed for rock climbing—shoes, chalk, ropes, quick draws, and crash pads top the list. PLUS one very important, but often overlooked, tool of the trade...

...There are also a few pieces of non-essential gear you’ll commonly see used by experienced climbers: brushes, tape, emery boards, skin balm, and rubbing alcohol are some of the most common. We already covered brushes here: Why do Rock Climbers Brush Holds, and today we’re doing a primer on tape.

There are two main reasons to use tape in climbing: skin protection and structural support.

No matter which use it’s for, start by getting the correct tape. Any old athletic tape won’t do for climbing. For climbing, your tape shouldn’t stretch, it should be very sticky, and you should be able to rip it into long, thin strips - usually about ¼” wide. If you’ve used athletic tape in other sports, like for a twisted ankle, it’s usually stretchy tape that sticks to itself but not to skin - that’s not what you want for climbing. We developed Friction Labs Athletic Finger Tape to be exactly what you're looking for. We've also got Leukotape P if you prefer to keep it old school. Everyone’s body and needs are different, so consider trying out a few different types to see what works best for you.

This is particularly relevant if you climb outside, but many people use tape to protect their skin in the gym as well. The basic idea is to create a layer of protection to prevent your skin from ripping. This is commonly done at the end of a long, hard session when your fingers are raw, painful, worn down, and most likely to tear. An extra layer or two of tape can save you from an injury that might take a few days to heal.

One downside is that tape reduces your feel for the holds and also reduces friction. Though it gives you some extra padding, tape doesn’t grip holds as well as your skin. The side touching your skin will also start to slip and slide as you sweat, making your grip a lot less reliable.

The other weakness of using tape to protect your skin is that you don’t give your skin a chance to acclimate to the demands of climbing. This sport is hard on your hands, but your skin will naturally toughen up over time. If you avoid the pain by taping, you get in the way of that process. Instead of relying on tape to reduce the pain, challenge yourself to control your hand movement and placement as much as you can when going from one hold to the next. It’ll help you get more focus, precision, and longevity in your climbing. Your skin will hurt more in the beginning, but it’s worth it for the long haul! If a specific hold is particularly sharp/uncomfortable, you might decide to tape while you work out the rest of the problem, then remove the tape for a genuine send attempt.

Sometimes desperate times call for desperate measures. If you get a skin tear but you aren’t ready to stop climbing, you can usually get a few more last-ditch attempts by using tape. Be mindful though: If you’re bleeding, make sure to stop the blood flow first - don’t be the person who gets blood on the holds, that’s gross. The best way to tape is usually to rip off a thin piece and apply it to the back of the injured finger. Then, wrap the wound and overlap the tape a few times. Anchor the other end of the tape to the joint below the wound to prevent it from falling off immediately. It won’t last long or offer a ton of protection, but might help you eek out a few final attempts if your psych won’t let you quit.

The most extreme example of using tape to protect skin is in crack climbing, where you use tape to make a glove, almost like a boxer, to get protection from the rock. In crack climbing, you often jam and twist your hands inside the rock cracks to get grip, so protecting the back of your hand and knuckles is important.

You might not realize it, but your fingers are actually an intricate web of bones, muscles, tendons, joints, and pulleys all working together in a specific way to give you proper hand function. Climbing can stress and injure some or all of the pieces.

Pretty much all research has shown that taping a finger with an injured pulley is ineffective. The only technique that is known to help is REST. However, this doesn’t stop climbers from trying. Some climbers think that wrapping a few layers of tape around the injured finger will provide enough structural support to keep the tendon in place and prevent further injury to the pulley.

Others swear by more intricate techniques like the H-method and the X-method.

It’s worth saying again: everybody has their own opinion on tape’s effectiveness and we at FrictionLabs haven’t run any tests of our own to validate a particular theory...but if your finger hurts, it’s probably time for some rest. Overload followed by rest = strength and regeneration. Overload without rest = injury and degeneration. If your finger is injured, take a few weeks off and then ease back into it. A more serious injury could have you out of the game for months or longer.

Whether in the gym or at the crag, the worst thing you can do with tape is leave it on the ground and litter. Pick up your trash!

And of course, like we already said above, don’t rely on tape to stop your bleeding. If you’re bleeding, it’ll get through the tape and onto the holds, which is incredibly inconsiderate of other climbers.

Hopefully you’ve got a good sense now for the basics of taping. Not everyone does it. Sometimes it comes in handy, other times you’re just fooling yourself. Experiment, figure out what works for you, and keep crushing.

And of course, if you have any questions or additional tips, put those in the comments, too!

Whether you’re a new climber or a seasoned pro, you crave the moment where your grip does more than you thought it could. That split second is nirvana. At FrictionLabs, we help climbers find that feeling. We use science to engineer the best chalk for rock climbing success. Try it to experience better performance, safer breathing, and healthier skin. 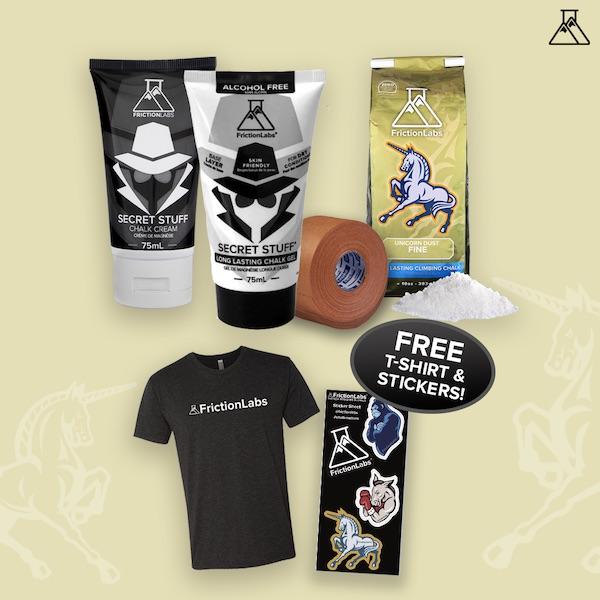 Secret Deal #2
Check It Out
us 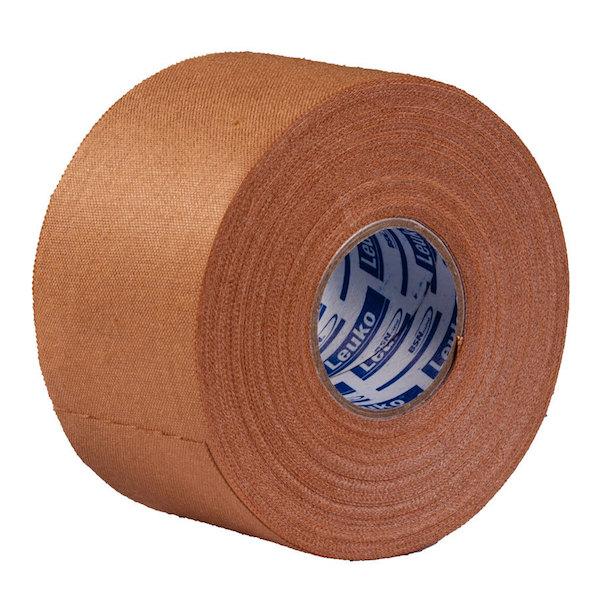 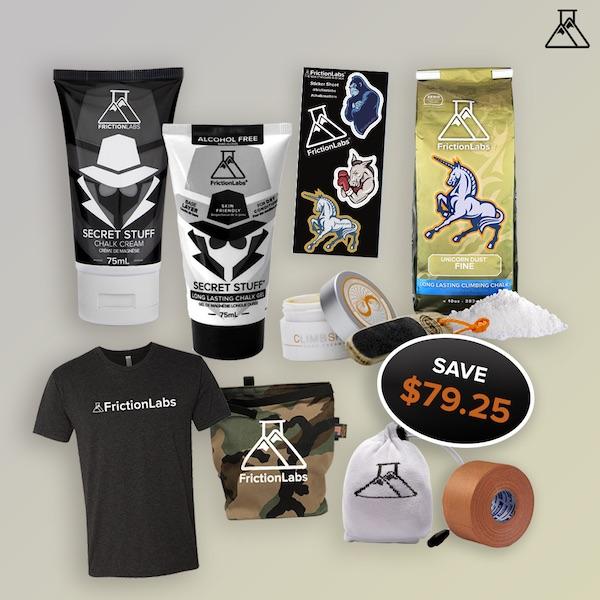 Secret Deal #4
Check It Out
Subscribe
We only send emails we'd be psyched to receive ourselves.