Why do Rock Climbers Brush Holds?

Your first time in a gym, you might think rock climbers are seriously obsessive about oral hygiene. Spare toothbrushes are everywhere you look.

Here’s the deal: Climbers use brushes to clean holds and get better grip.

In the gym or outside, holds get dirty. Grease, grime, sweat, skin, chalk, and shoe rubber sludge up holds over time, forcing you to apply more pressure to hang on - not the smartest way to spend energy (side note: this is also true of using bad chalk…).

Brushes are an awesome tool to help you clean the gunk that builds up on hand and foot holds.

Over time, climbers in pursuit of better gear have advanced from regular bathroom toothbrushes to horse hair to the current standard: boar hair. Stiff, long-lasting bristles and good texture make boar hair a great choice for getting rid of excess buildup on a hold.

Regardless of material, brushes come in all shapes and sizes:

FEATURED PRODUCT
Climbskin Double-Sided Hand & Finger File
Get It
us

Everyone has their own brushing technique. Some people do the old fashioned back and forth, others brush in small circles. Thankfully, you can’t do it wrong. Your goal is to get as close to the original texture of the hold as possible, leaving just a thin layer of chalk for grip.

If you’re really extreme, you can keep a spray bottle of isopropyl alcohol on you. It’ll lift the grime, helping you brush it away. Whatever alcohol is left evaporates in seconds.

Finally, if you want to look like a crazy person, forget the brush altogether: take your shirt off and jump up and down as you whack the holds with it.

If you don’t have a brush, it’s not a big deal to ask to borrow someone else’s. In a gym you might also find some community brushes lying around, usually attached to a big stick for more reach. If you use one, be sure to put it back where it belongs and safely out of potential fall zones.

Be thoughtful. If you grease off a hold, brush it for the next person or let them know they might want to brush it themselves. Of course, remember that if someone brushes a hold, it’s customary to let them get the next attempt on their freshly cleaned project. If you’re feeling giving and think you could help someone else’s psych by brushing a bad hold for them, go ahead, they’ll really appreciate it. Brushing is a quick and easy way to help leave the gym/crag a little better than when you walked in.

If you’re outside, don’t forget to use a brush to get rid of any tick marks before leaving. This is one of the most frequently forgotten rules of outside climbing etiquette but so easily done with a simple brushing.

Some people never brush. Others consider it an essential part of their pre-climb ritual. Most people are somewhere in between, brushing a hold when it feels really bad or when they’re super focused on sending.

To Climb Your Impossible, a lot has to go right: focus, preparation, technique, gear, conditions, and so much else. Making sure your holds are properly brushed is a simple way to limit some additional variables and set yourself up for success.

Hopefully you now have an understanding of brushing basics. If you still have questions, leave them in the comments below and we’ll get back to you!

Whether you’re a new climber or a seasoned pro, you crave the moment where your grip does more than you thought it could. That split second is nirvana. At FrictionLabs, we help climbers find that feeling. We use science to engineer the best chalk for rock climbing success. Try it to experience better performance, safer breathing, and healthier skin.

Gorilla Grip (Medium Chunky)
Check It Out
us

Chalk Bag - Includes 5oz of Free Chalk
Check It Out

Secret Stuff Liquid Chalk
Check It Out
us 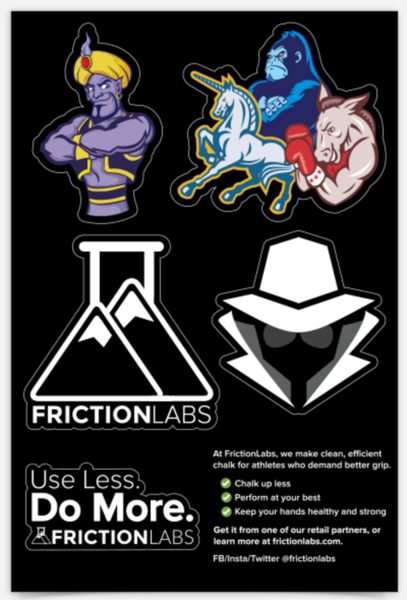 Sticker Sheet
Check It Out
Subscribe
We only send emails we'd be psyched to receive ourselves.